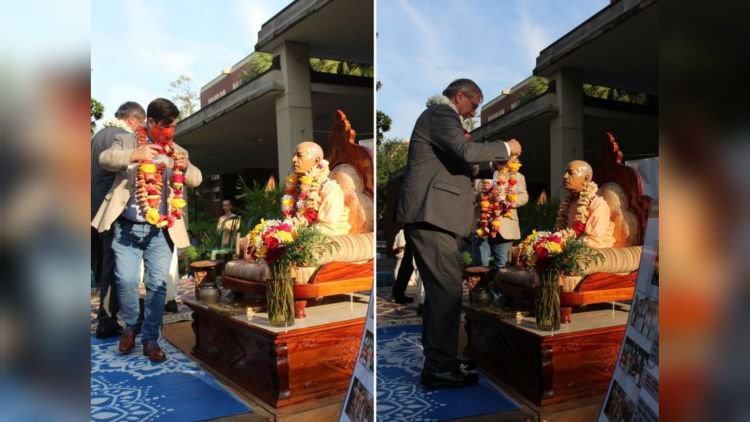 Last weekend devotees celebrated the 50th anniversary of Srila Prabhupada’s 1971 vist to Gainesville, Florida, as well as his 125th birth anniversary with a three-day festival. The event, which ran from July 29th to 31st, included speeches from pioneer devotees as well as appreciative words from the Mayor of Gainesville and the President of the University of Florida.

On July 29th, the day on which Srila Prabhupada gave his arrival address at the UF Plaza of the Americas, the program began at 6:45am with kirtan on an outdoor stage at the Plaza, graced with the presence of Srila Prabhupada’s murti. Pioneers Hridayananda Das Goswami, Amarendra Das, Bir Krishna Goswami and Dharma Das – as well as Ananga Manjari Dasi, who wasn’t able to attend but sent her written words – then shared the history of the renowned Krishna Lunch Program and of Prabhupada’s visit.

As recounted in the book “Gargamoney: Serving Srila Prabhupada 1966–1977,” Gargamuni Das first went to Gainesville in 1971, and distributed the classic ISKCON sweet Simply Wonderfuls at the Plaza of the Americas while chanting Hare Krishna. He introduced several people to Krishna consciousness, including Amarendra Das. Soon, the two were serving prasadam to 70 people daily from Amarendra’s house. 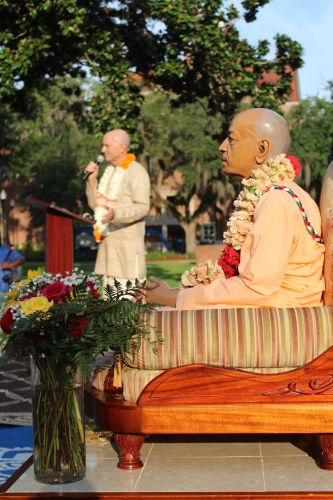 Srila Prabhupada personally visited Gainesville on July 29th of that year, giving an arrival address at the Plaza in which he further inspired his students to distribute prasadam and perform kirtan at the university.

“Lord Chaitanya Mahaprabhu predicted that in every village, town, country on the surface of the globe this sankirtana movement will be spreading,” he said. “So we are very much obliged to you that in this remote place, which is thousands and thousands of miles away from Lord Chaitanya’s birthplace, Navadvipa, you are carrying out, to fulfill His desire, chanting Hare Krishna mantra.”

Although ISKCON Gainesville closed sometime after, Amarendra Das and his wife Gayatri Devi Dasi returned to reopen it in 1973, and were joined by Sankarshan Das from Miami, who continued preaching on the Plaza with chanting and prasadam distribution. Soon, a student who became initiated as Syamakunda Das joined them. From their center, the group began taking a full lunch to the Plaza every day. The program, which has gone on nonstop since, became a staple on the University of Florida campus, dishing out around 1,000 prasadam meals daily pre-pandemic. (During the pandemic, with precautions in place, Krishna Lunch has continued serving some 400 meals a day.) 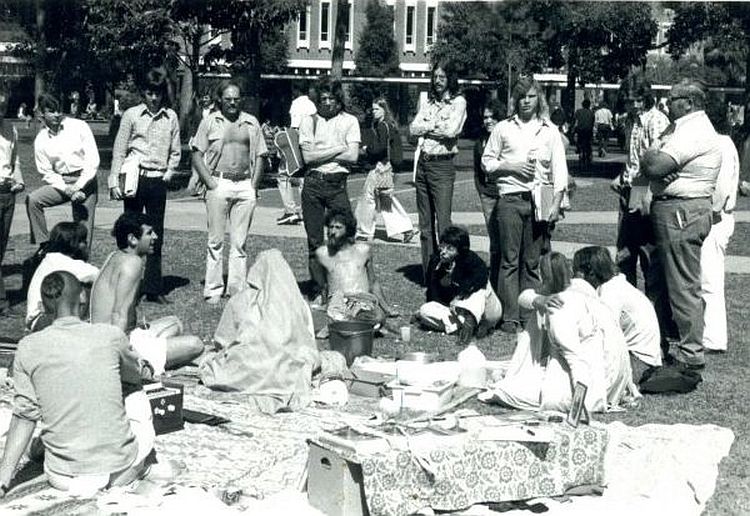 Amarendra Das speaks about Krishna consciousness on the Plaza of the Americas as Sankarshan Das listens, January 1974

Mayor Poe recalled how visiting the Plaza to eat Krishna Lunch was a highlight for him while on days off from High School in Gaineville, and later when attending the University of Florida.

“I was down here being nourished both physically and spiritually most days of the week,” he said. “I and all my friends and colleagues always enjoyed so much coming down here and sharing in the community, because it opened us up to a much larger world. And I believe firmly, with all my heart, that if the Krishnas had not come to Gainesville, and had not set up their outreach, and their campaign of spiritual and physical nourishment right here, the Plaza would not have drawn the diversity of thought and of people from around the world, and would not have exposed people like me to such broader concepts than I grew up with.”

He added: “You have so much enriched our community. This is the epicenter right here of where your love, and your peace and your grace has radiated out into our larger community.” 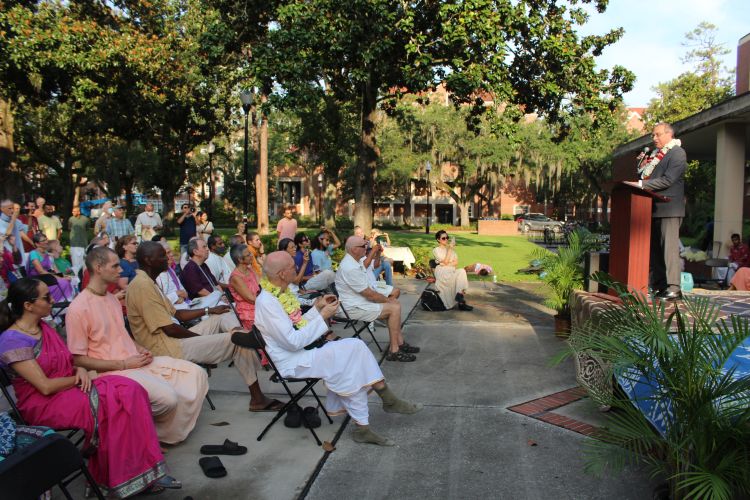 Meanwhile the President of UF called Krishna Lunch a University of Florida tradition that has “nourished bodies as well as souls,” and commended the program for serving nearly 3 million meals on campus across generatons of graduates. He expressed his gratitude to Krishna Lunch and its supporters for their contribution to the 2018 renovation of the Plaza and added, “I’m public about my personal faith and I encourage our students and faculty to do the same. To celebrate not only their own faith, but to think about others, to understand other faiths, to explore other faiths, both in understanding, but also in practice. And Hare Krishnas, you all contribute to that at our university, and make our university stronger by your visible presence, and by the fact that you are here and our students get to know and learn about you all.”

After their speeches, the Gainesville Mayor and UF President garlanded Srila Prabhupada, followed by Guru Puja. Hridayananda Das Goswami, who was temple president in Gainesville during Prabhupada’s visit, along with Amarendra and Dharma Das, then gave a tour of the site of the original Gainesville ISKCON temple at SW 2nd Street and SW 2nd Place.

Krishna House Educational Director Prabhupada Priya Dasi, who attended, recalls: “Although there’s no building there now – it’s just a grassy area in the corner of a parking lot – they were explaining, ‘This is where the front steps were that Srila Prabhupada walked up when he arrived,’ and ‘Now we’re standing where the temple room was.’ We walked away with a sense of what it might have been like to be there, in that place with Srila Prabhupada and the devotees. It was sweet and uplifting, and made us feel part of the history. Standing right there in the spot with the people who serving this special personality was a very sacred feeling.” 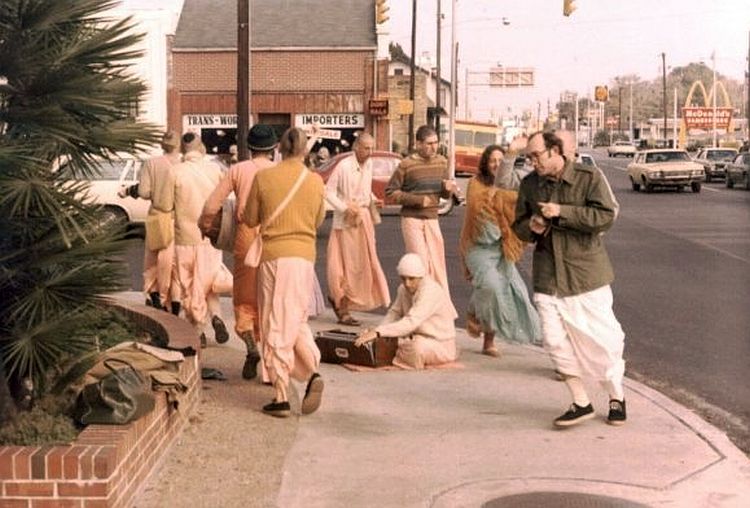 Later on Thursday evening, at 6:00pm, the pioneers of ISKCON Gainesville once again spoke, this time at the recently acquired headquarters of the Bhaktivedanta Institute for Higher Studies. The talk, which was broadcast online at Krishna House and Hridayananda Das Goswami’s social media channels, focused on how much Srila Prabhupada stressed education.

The next day, during an Open House at the Bhaktivedanta Institute from 3 to 7pm, B.I. researchers showcased their work as well as activities for the upcoming fall semester. In his poster presentation Research Associate Doug Watson, an astrophysicist, showed the scientific conception of a cyclic universe and its correlation with the Vedic universe.

Murli Gopal Das, who holds a PhD in physics, demonstrated his work on Tantra, Sankhya and the Paranormal. Murli Gopal presented the connection between the body and mind through prana; as well as phenomena like lucid dreaming, hallucinations, the nature of ghosts, remote healing and memory recall from the point of view of Tantra, Sankhya and Vedanta.

During the Open House, Director Brahmatirtha Das also welcomed everyone and explained the Bhaktivedanta Institute’s plans to house visiting Vaishnava scholars from around the world when travel opens up more. In addition, Open House guests could view the Bhaktivedanta Institute’s extensive library, peruse a book table of the late ISKCON scientist Sadaputa Dasa’s recently reprinted works, and participate in a question and answer session about strategies for presenting Krishna consciousness to intellectuals of society with Hridayananda Das Goswami.

Finally on Saturday July 31st, a groundbreaking ceremony was held at the Krishna House in Gainesville for a new facility. The building will include a dining space and custom-made commercial kitchen for Krishna Lunch; as well as for efforts like Healthcare Heroes, which delivered prasadam lunches to doctors and nurses during the pandemic, and Krishna CARES, which delivers lunches to the vulnerable, the elderly, and others in need.

The new facility will also include accommodations for students attending the Krishna House’s Bhakti Academy, a seminary-like program where they can study Bhakti Shastri, do service and attend the morning program either full-time or part-time. 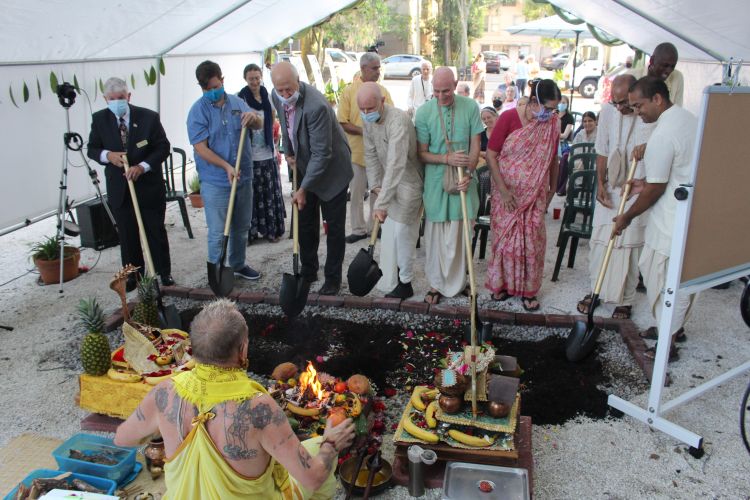 “The idea is for Krishna House to become an educational hub where young devotees can come and get educated – a place for training thoughtful leaders of the future,” says Krishna House President Sruti Sagara Das.

The groundbreaking ceremony, which began at 7:30am, included a fire yajna and installation of Ananta Sesa conducted by Chaturatma Das, followed by speeches from Mayor Poe and Alachua City Commissioner Robert Wilford.

“I am so grateful that you chose to expand in this location,” the Mayor said. “You are such an anchor to our community in this old historical part of Gainesville.”

Commissioner Wilford commented: “I posted about the great work you do with the UF students, and you did with the hospitals, and going door to door distributing your food during the pandemic. That has just been God’s blessing.” He also appreciated the yajna, saying, “That was a beautiful ceremony. If this is not God inspired, then I don’t know what is. We wish you well and we are grateful for what you do.”

“The Anniversary Festival was really exciting for the devotees, especially to see that leaders in regular society are appreciating what the devotees have been doing for years, including our initiatives during the pandemic,” Sruti Sagara says. “I even saw some senior devotees crying, because it was so touching for them to see these leaders in society appreciating Srila Prabhupada and his mission.”