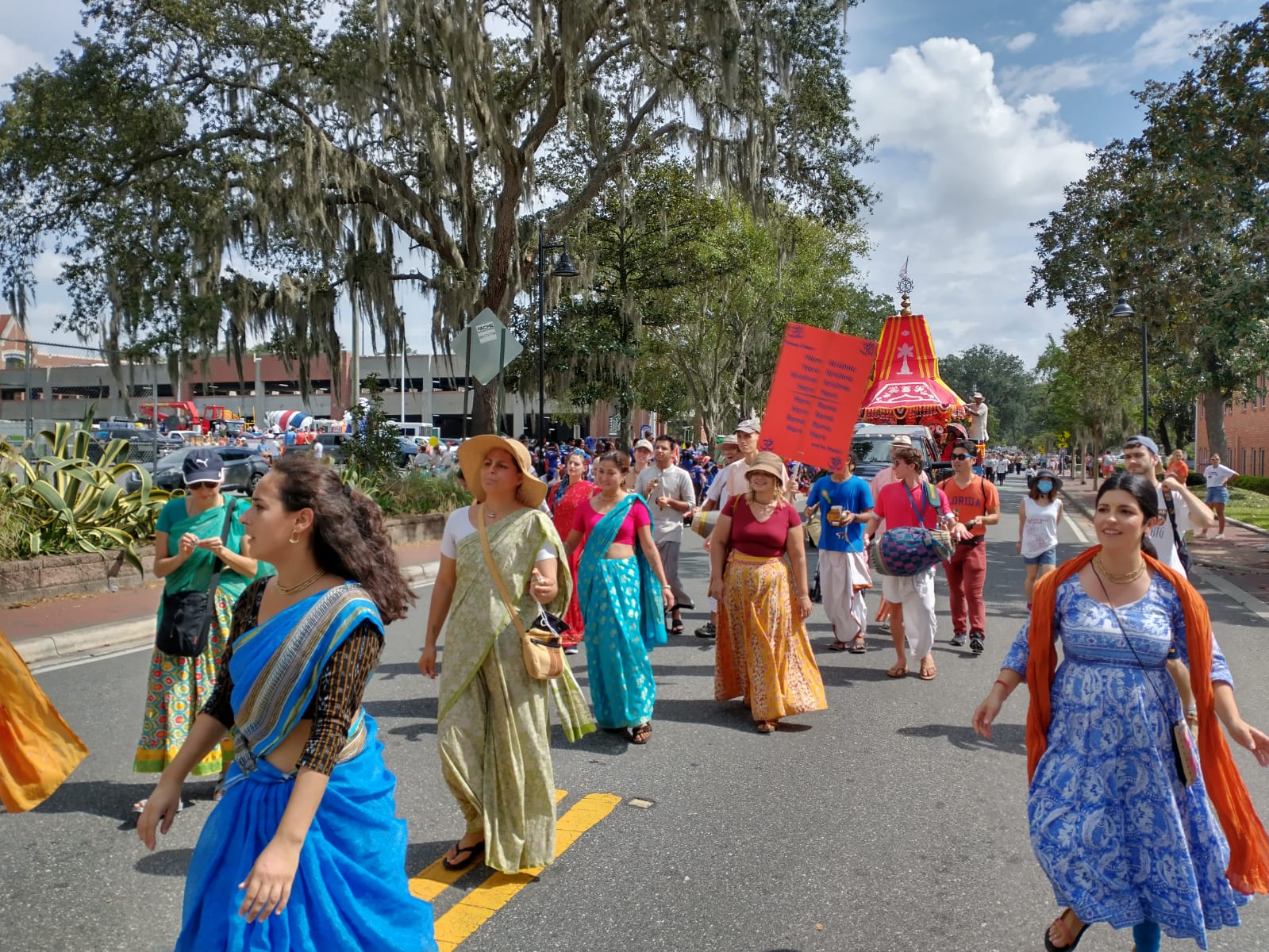 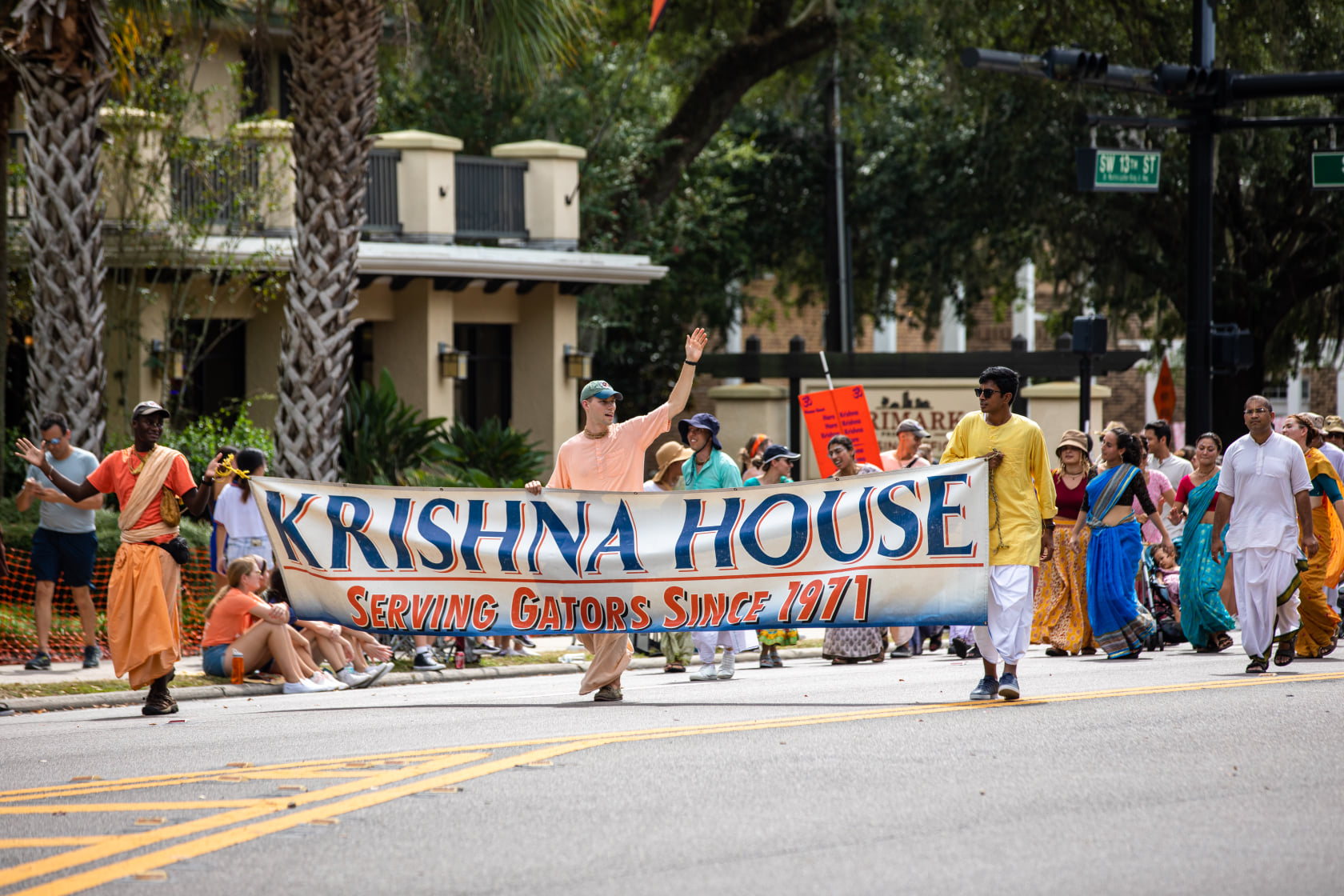 You could hear the drum for miles, not with your ears but with your heart, steadily getting louder as the morning pushed on. It is like a tribal calling, a signal, from the world beyond that soon the flood gates of Krishna’s mercy will be opened, and all will be showered with uncontrollable ecstasy by the desires of Lord Jagannath. He loves His people, and they love Him – even if they do not know it. By the time the morning program is over, the excitement is reaching our throats. No one can deny the electricity that is building underneath our skin. It’s Ratha-Yatra day, and we are ready. Ladies are preparing their best saris and gentlemen are finally combing their hair, we want to see Lord Jagannath. He brings a certain flavor of Krishna bhakti that you can’t find at any other market. The Ratha-Yatra is a fire sale of pure devotion, and everyone is caught in its midst. People don’t know why, but that crazy looking black figurine brings tears to the eyes of the unsuspecting onlooker who feels some sort of belonging in the passing crusade of joyous smiles and electric dancing. Maybe it’s because the Lord is so happy to be out with His people, longing for every opportunity to see them face to face. Maybe they feel it because it’s the first time they’ve seen people giving attention to God instead of seeking it for themselves. Or maybe it’s because the undeniable joy that permeates the atmosphere as Lord Chaitanya’s army spins and swirls down the street gives a momentary experience of true freedom. Whatever the reason, we can be sure that the reception of Lord Jagannath’s traveling circus will be laden with smiles. And this day was no different.

Our very own devotees of the Krishna House community began the chanting party long before the parade even started. Too eager to wait, the enlivened ensemble, lead by Gaurangi Gandharvika, marched, skipped, and swayed down the sidewalk inundating the streets with the Holy names. The townsfolk were already in a festive mood so there was no problem in getting fired up Gator fans to dance on a day like this. Many fans spilled their drinks to dance arm in arm with our ecstatic devotees as the mantra sign beamed triumphantly in the air. The mood was just right for a Krishna miracle. We got to the parade site early, as punctual devotees do, and waged on amidst the noise of car stereos and rolling chatter. Sruti Sagar prabhu lead us in a steady kirtan, preparing for the big unveiling of the Lord to his beloved forgetful friends, all looking for the excitement and substantiality that only He can bring.

After an extended warmup, we finally get released into the world just trailing a preteen dance troop and loud Hawaiian bar. Devotees lead the charge with a long bold-lettered Krishna Lunch banner that stretches across two lanes of traffic. Like the sunshine poking out from behind the clouds, the energy of the devotees is too contagious not to smile. People who were moments before standing stone-faced are now smiling and waving and busting a move or two of their own. Many people chaste to their chairs find a way to wiggle and clap to show their appreciation of Lord Krishna’s holy devotees. They are the embodiments of Krishna’s grace, and they are giving it freely with every second of genuine eye contact that hundreds and thousands received that day. This is our mission from Lord Chaitanya: to fill up with Krishna’s grace and then distribute it to every place that we go! People are out there looking for genuine connection and nothing cuts to the heart of a person faster and more efficient than an ecstatic chanting party. We carried on the cries for Lord Krishna for another two hours, walking more than two and a half miles! ‘Walking’ is used loosely here as most of us were dancing, skipping, and jumping the whole way, especially Murali Gopal! After many high fives were made and much love shared, we wrapped up our escapades in Sweetwater park, where the enthusiasm surged to a new high at the start of “Sarira avidya jal, jodendriya tahe kal…” The wonderful Krishna lunch team managed to bring out a spread of the famous Friday Krishna Lunch, fit with rice, chili, Gauranga potatoes, chocolate halava, and our famous Krishna dressing. Many passersby were given their own plate of Krishna prasadam as they came to check out the festivities. Jagannath’s cart then came cruising in at the perfect time to watch over Their devotees as they lovingly honored the Lord’s feast with one another. This is the great relishment of the Lord: to witness His devotees become enlivened in bliss by the simple process of singing, dancing, and feasting

We wrapped up our evening with warm thanks and goodbyes as we prepared for yet another fun-filled day in the Hare Krishna movement. Thank you all who supported the Ratha-Yatra effort this year and thank you all for your sincere service to Srila Prabhupada’s sankirtan mission. All glories to the devotees of the Lord.