Finding the Natural Beauty of the Soul in National Parks

Finding the Natural Beauty of the Soul in National Parks

Since all the summer festivals were cancelled due to the pandemic, the Bhakti Boyz traveling sankirtan party consisting of Madhu Mangal and Ananta Vallabha, had to wrack their brains to think of alternatives for book distribution. Hearing that the US National Parks were exceptionally busy this year, they decided to give it a try. Madhu Mangal contacted all the National Parks in advance to secure permission to set up their book table, and when everything was arranged, they hit the road.

Covering a huge circuit from Florida across to Texas, Arizona, New Mexico, Southern California, Utah, and back in just six weeks, they visited most of the National Parks on the way including the Grand Canyon, Joshua Tree, Yosemite, and Guadalupe. At the Grand Canyon, they met an old sankirtan veteran, HH Ganapati Maharaja who has been distributing books there for the past 20 years and who was happy to show them the ropes. 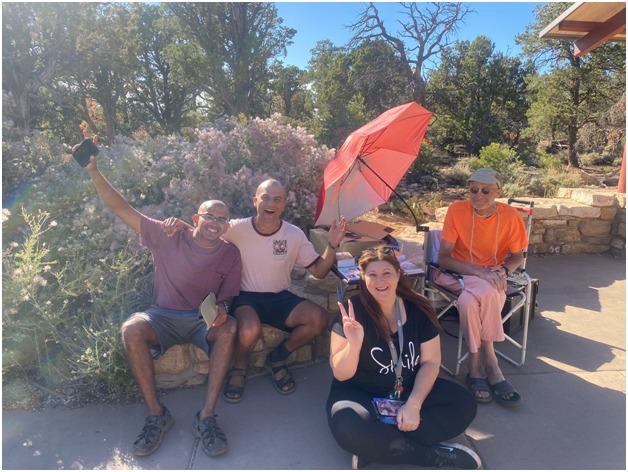 It turns out that all the National Parks in the USA have a “2nd Amendment Zone” or free speech area where anyone can set up and flog their opinions to the general public. Fortunately for the devotees, these happened to be in prominent locations where many visitors pass through. So, they set up their book table with a sign saying “Free Yoga and Meditation Books,” and they offered small books for free while requesting donations for larger ones.

This was Ananta Vallabha’s first time on travelling sankirtan, and sleeping in a van, taking cold bucket showers in the morning, and eating simply, reminded him of doing parikramas in India. Approaching people on book distribution was also a challenge at first, but by Madhu Mangal’s good association, he quickly gained confidence, and was soon off and running on his own. “Getting into book distribution is a little like getting into the cold shower,” Ananta said, “You don’t want to do it, but once you do, you feel amazing! It taught me how to control my mind and just do the service without getting mental about the results.” 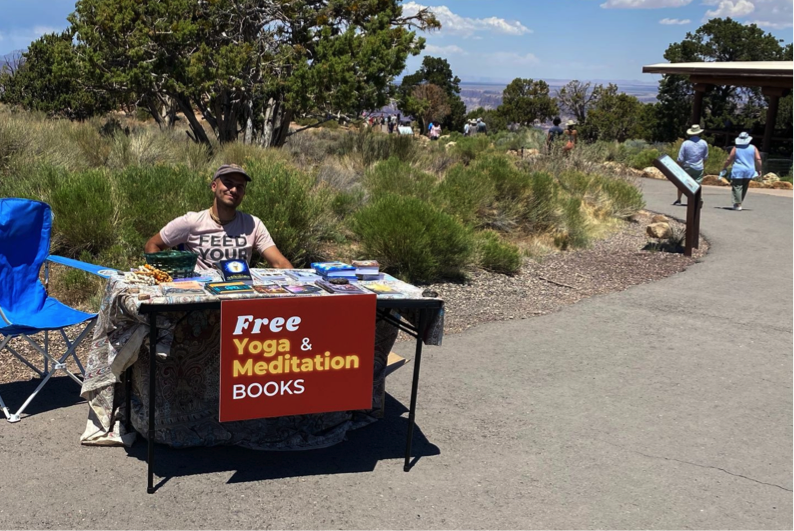 Even for Madhu, a seasoned book distributor, sankirtan this summer was a little different because instead of the young concert goers that he was used to, most of the people they met at National Parks were families. Surprisingly, the families were very receptive, even more than many of the young people that they met. Parents were happy to stop and let their children look at the books. Nowadays, many children do mindfulness exercises in school, so meditation is something they have had positive experiences with. One little girl, who was only seven years old, was very interested, and her mother bought her a book. She also wanted japa beads, so her mother gave a donation for those, too, and the monks showed her how to chant the Hare Krishna mantra on the beads. The little girl was so grateful that she took out her own little purse and asked her mother if she could give a donation, too. Her mother said, “You can keep your money for ice cream, or you can give it to the monks. It’s up to you.” For the little girl, it was a no-brainer – she happily placed two dollars in the donation basket, as her parents smiled approvingly. 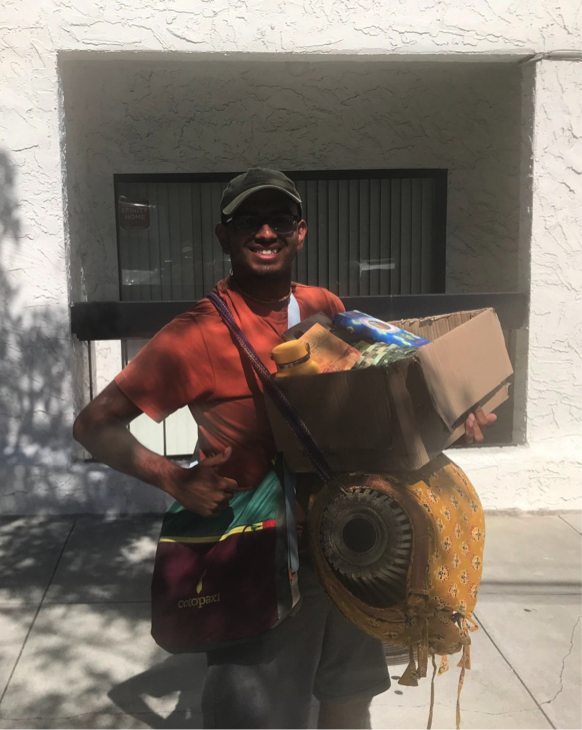 Before leaving on the trip, Madhu and Ananta had made a solemn vow – that every day, even on their days off, they would share Krishna consciousness with at least one person and get that person to chant Hare Krishna. On Lord Nrsimhadeva’s Appearance Day, they were at Guadalupe National Park, and they took the day off to celebrate the festival by cooking a special feast – kichari and sweet rice – which was special for them since they hardly ate cooked food. That day, they met Manny, an open-minded young man who was on a “soul-searching trip” and happened to park beside them. When they offered him prasadam, he not only heartily accepted but came and asked for seconds. Taking this as a sign of natural devotion to Krishna, they welcomed him in for kirtan, and after that showed him some books. Being a Beatles fan, Manny readily took Chant and Be Happy along with the Science of Self Realization, and he also took a set of japa beads. Guadalupe was his first stop, and Manny expressed that he felt it was a good sign that on his trip to find himself that summer, the first thing he found was a couple of Krishna monks. Madhu and Ananta kept in touch with him throughout the trip, and Manny reported that he was chanting every day and that on his next trip, he would try to come visit them at Krishna House. 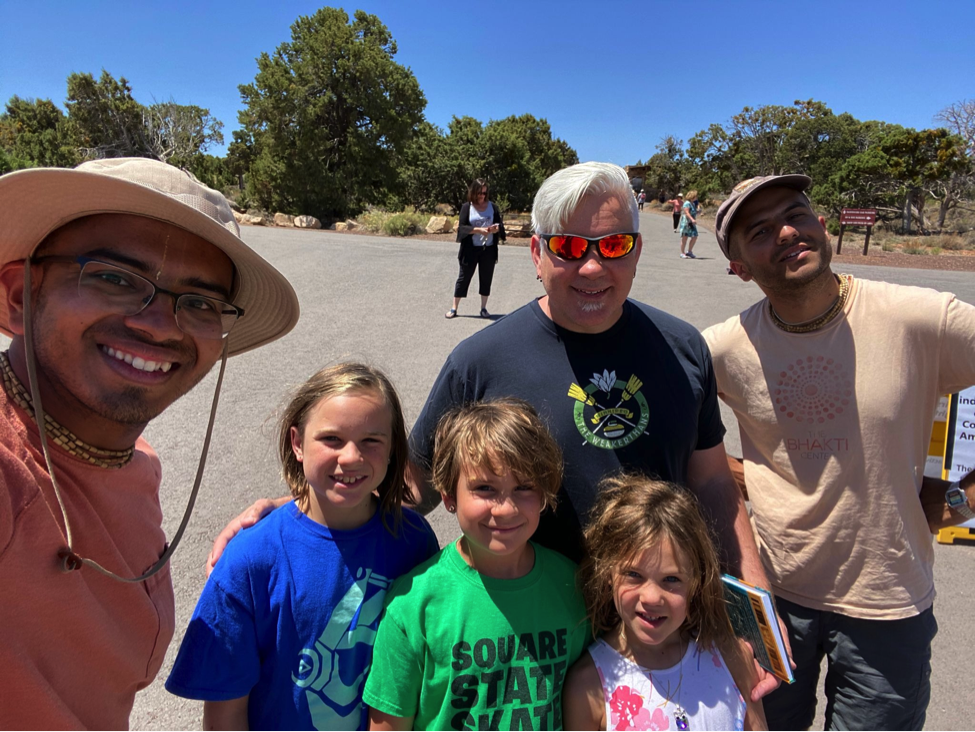 Manny was just one among the many fortunate souls – from cute little kids to psychic witches to yogis, atheists and Trump supporters – whose hearts were touched and whose lives were changed by an unexpected encounter with two jolly young monks, Srila Prabhupada’s books, and the holy names of Krishna. 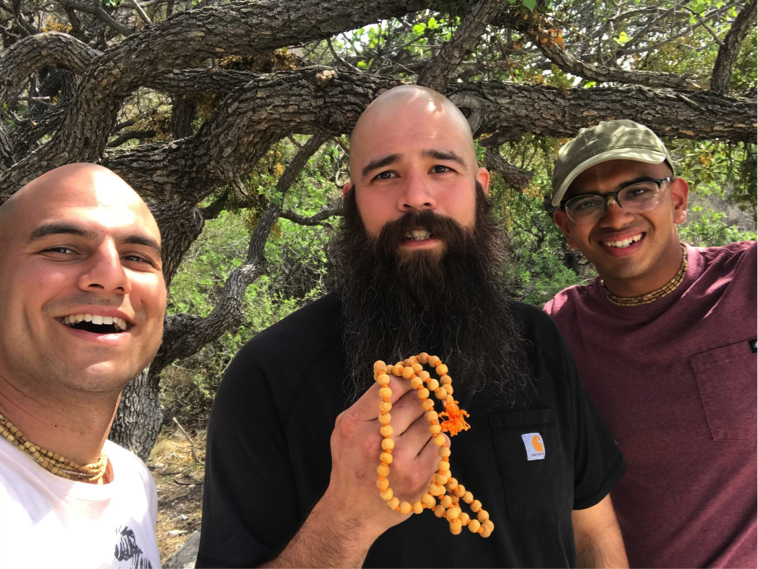